Lost in The Woods Maze

War Eagle Cavern offers several hours of fun family activities. After your cavern tour, hike our pristine nature trails on the shore of Beaver Lake or pan for over 20 different kinds of gemstones at the War Eagle Mining Company. Experience gravity gone wrong in the all new Moonshiners’ Mystery Shack, explore the Lost in the Woods Maze, or enjoy the area’s most unique gift shop!

For guests who want to make the most out of their visit to War Eagle Cavern and keep the fun going for hours on end, our best deal is the War Eagle Value Pass. The War Eagle Value Pass includes a ticket to the one hour Traditional Cavern Tour plus unlimited all-day passes to the Lost in the Woods Maze and Moonshiners’ Mystery Shack.  For only $6.00 more than a Traditional Cavern Tour alone, guests can triple the fun with three of our most popular attractions.

*Gem Stone Panning is not included.

Experience gravity gone wrong! Water and balls roll uphill, people walk at strange angles and appear to grow taller and shorter, depending on where they stand! Years ago, moonshiners operated in the cavern – it was perfect for making the “Devil’s Brew” – in fact, the cove of Beaver Lake where the cavern is located is still referred to as “Devil’s Gap”. Years after the cavern was opened for public tours, remnants of a still were found in the cavern, and remains of what must have been a shack were discovered on the hillside. Local lore has it that the good ole boys would stay in this shack while making their “White Lightning” inside the cavern. Building from the foundations remaining, it was soon discovered that gravity had gone wrong. Was it because of the huge cavern just below pulling it in? Is there some kind of vortex? Or was there just too much moonshine involved in the construction? Experience it yourself! See how water flows uphill, balls roll uphill, people walk at strange angles and seem to grow taller and shorter!

Expect to be totally confused as the laws of gravity seem to no longer apply! Mystery Shack passes are good for unlimited trips on the day of purchase. 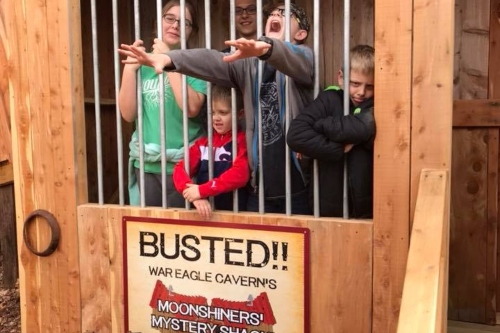 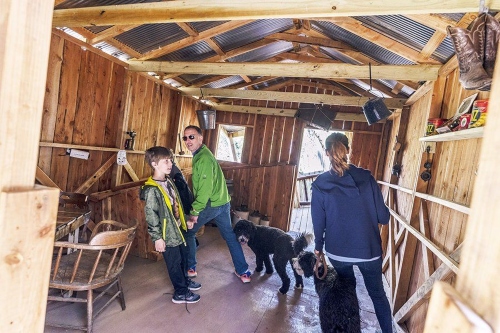 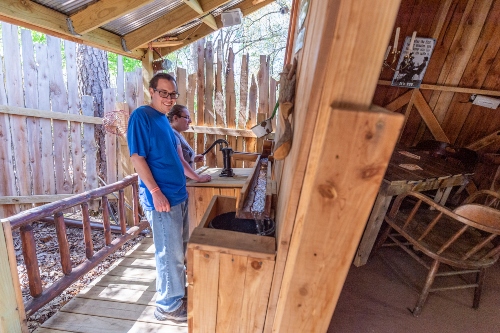 Lost in the Woods Maze

It takes skill, cunning, patience and a sense of adventure to figure out the Lost in the Woods Maze!

Not only do you have to find your way through over a half-mile of twists and turns, but you must also find FIVE lost Indian tribes inside the maze! When you have found each Indian tribe punch the ticket next to the name of the tribe, and push on to the next one! When you have completed the ticket, head for the Exit (wherever that is). Write down your time at the entrance and see how long you take figuring it all out or challenge your friends to see who can get through the fastest. Think you did good – see if you can do it again!  Maze passes are good for unlimited trips on the day of purchase. 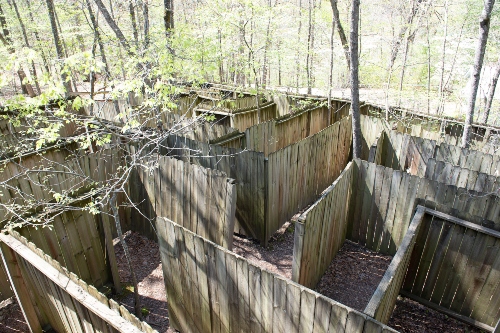 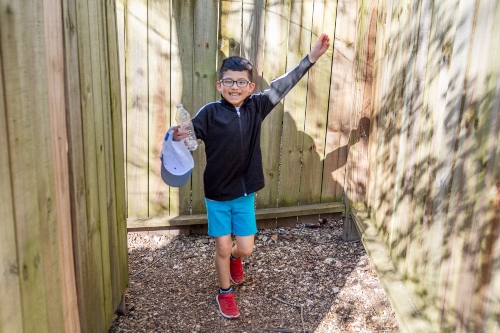 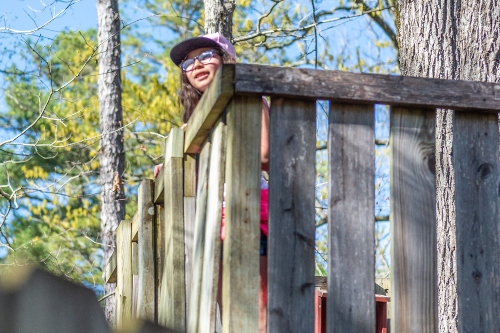 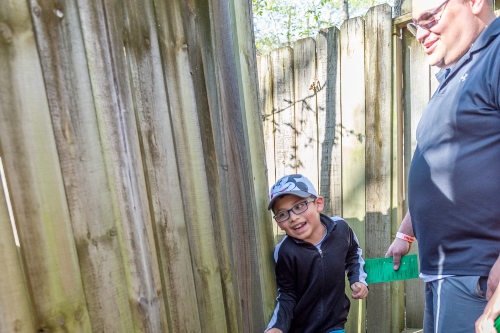 Kids and adults alike have fun panning for semi-precious gems at the water sluice in the War Eagle Mining Company. We have taken the work out of mining for you – just buy a bag of what looks like plain old “dirt” in the trading post, then sift through it at our water sluice to find over 20 different kinds of stones … and keep everything you find! The gems have been gathered from mines all over the world: Rubies, Amethyst, Emeralds, Sapphires, Topaz – even Arkansas Crystal! We guarantee over 8 ounces of treasure in every bag and even provide a bag to put the stones in, along with an identification card to identify each stone when you get home. 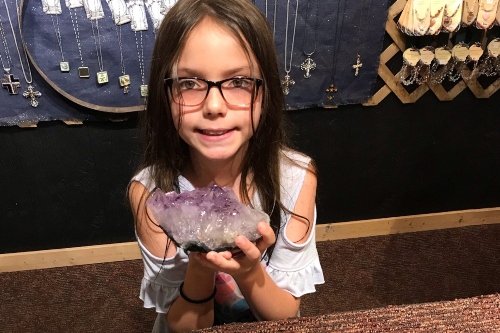 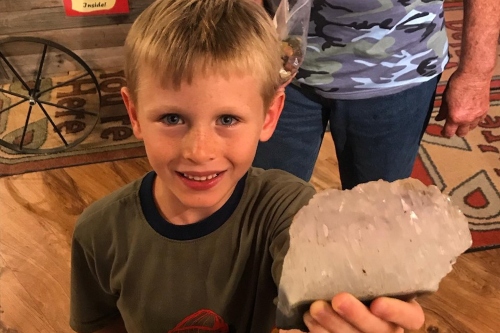 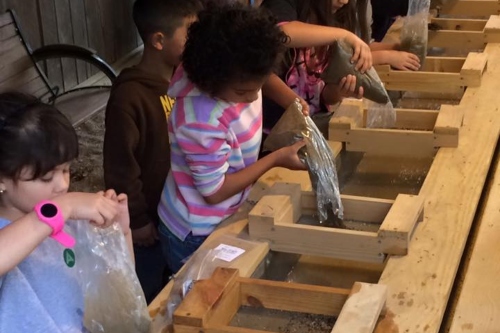 No trip to War Eagle Cavern is complete without a visit to the area’s most unique gift shop. We offer a large selection of well-priced gifts and souvenirs that are sure to appeal to almost everyone, from commemorative items like t-shirts, mugs, and shot glasses, to specialty items like minerals, gemstones, artwork, jewelry, and collectible knives. We even have a great assortment of stuffed animals and toys for the kids. If you are looking for a little refreshment, our gift shop also has a variety of snacks, ice cream, and specialty sodas (ever tried sarsaparilla? It’s delicious). Be sure to stop in, shop around, or enjoy a beverage on the deck before you go. 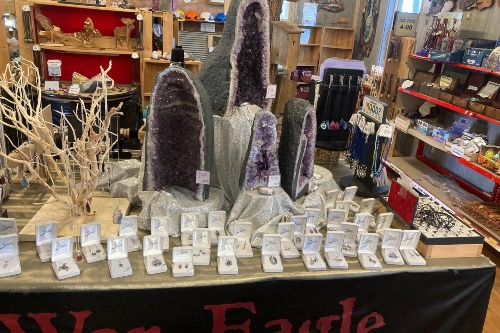 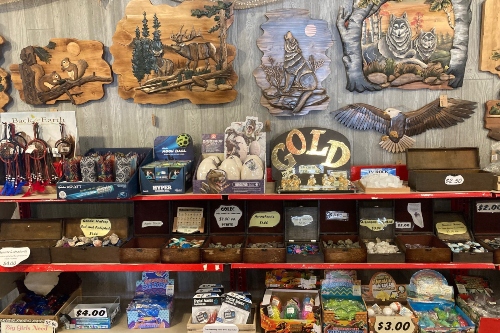 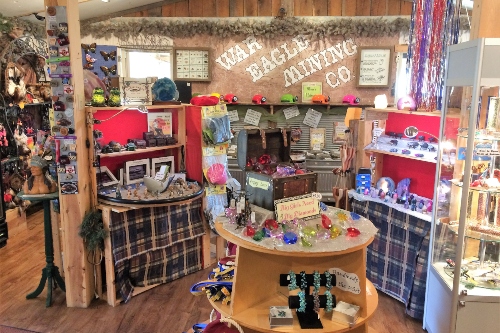 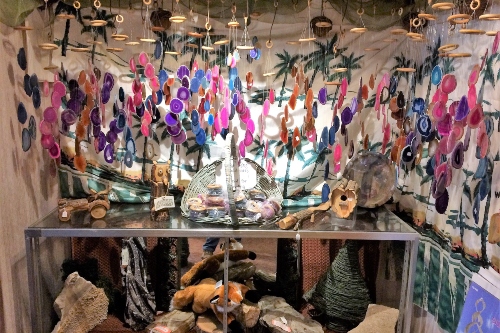